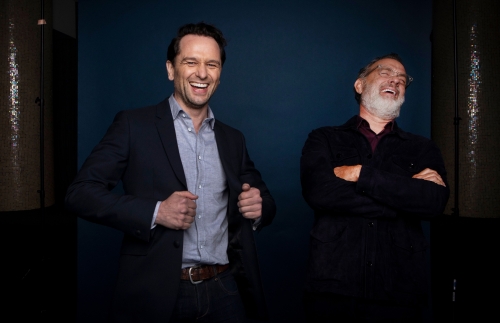 What was the typical response, early on, when you would tell people you were doing this movie?

Rhys: It was split for me because if I told people at home [in Wales] that I was doing a Mister Rogers film, they go, “Who’s Mister Rogers? Is it about that football player Aaron Rodgers?”

Hanks: Is that right?

Rhys: Yeah. Because that was the closest reference they have. The football player?

Hanks: The quarterback for the Green Bay Packers.

Rhys: They’d be like: “Do you play a linebacker of sorts?” I’d go, “No.” But, no, then you say, “With Tom Hanks.” They understand that reference. In this country, you say you’re doing a movie about Mister Rogers with Mr. Hanks and it elicits quite an emotive response for many reasons.

Rhys: Yes. But you can understand. I mean, the pairing of those two, Tom Hanks as Mister Rogers, is pretty remarkable.

Hanks: Most people thought it was a biopic. They thought, “Oh, a grand history of Mister Rogers.” When I read Tom Junod’s article, and I realized, “Oh, Tom was that journalist, oh, dear, oh, that’s really different” … At the end of the day, man, you just hope you can surprise this audience somehow because they’re getting this [points to Matthew] and they’re getting this [points to himself]. If there’s not a surprise in there, we’re just absolutely doomed. Hopefully, there’ll be something in there that [the audience] didn’t expect as opposed to just an ongoing [begins singing]: “Sometimes people are sad…”

What were your perceptions of Fred Rogers before you started and how did that change? There’s this idea that he is this saint-like figure, and then you have others that view him as this fraud.

Hanks: There’s an old story that he actually has a bunch of tattoos because he was a Navy SEAL during Vietnam.

Rhys: I love that one.

Hanks: Wouldn’t that be a great thing? I would have said, “Yes, of course, I was. I killed a VC with my bare hands.” But in terms of who he was, you have to go, I think, to the show itself. The show itself is very easy to treat as an acid trip by way of … What is he trying to do? Is there a mind game that’s going on? Is it just a big, huge, tremendous feint? [Matt], did you watch a lot of the shows just in order to get an idea?

Hanks: I watched a ton. Hours and hours. Look, the show was on when I was maybe 11, 12, 13 years old. I just thought it was odd. The puppets, their mouths didn’t move. What are these odd songs he keeps trying to sing all the time? I was probably more in tune with all the imitations of him, the comedy bits about him. [More at Source]