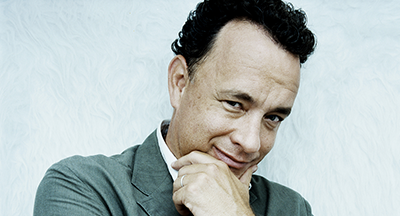 TOM HANKS holds the distinction of being the first actor in 50 years to be awarded back-to-back Best Actor Academy Awards®: in 1993 as the AIDS-stricken lawyer in Philadelphia and the following year in the title role of Forrest Gump. He also won Golden Globes for both of these performances, along with his work in Big and Cast Away.

Born and raised in Oakland, California, Hanks became interested in acting during high school.  He attended Chabot College in Hayward, California, and California State University in Sacramento.  At the invitation of Artistic Director Vincent Dowling, he made his professional debut portraying Grumio in The Taming of the Shrew at the Great Lakes Shakespeare Festival in Cleveland, Ohio.  He performed in that company for three seasons.

Moving to New York City in 1978, he performed with the Riverside Shakespeare Company until getting a big break when he was teamed with Peter Scolari in the ABC television comedy series “Bosom Buddies.”  This led to starring roles in Ron Howard’s Splash, Bachelor Party, Volunteers, The Money Pit and Nothing in Common.  In 1988, the Los Angeles Film Critics recognized his performances in both Big and Punchline, giving Hanks their Best Actor Award, roles followed in films such as A League of Their Own and Sleepless in Seattle.

In 1995, Hanks voiced the character Woody in the critically acclaimed hit Toy Story, the first Disney/Pixar film to be made, as well as the first feature film in history to be made entirely with CGI.  He later returned as Woody in the sequel Toy Story 2 and then eleven years after the original, in Golden Globe nominated Toy Story 3, which is currently the highest grossing animated feature film of all time, bringing in over a billion dollars worldwide. Toy Story 3 won the Academy Award® for Best Animated Feature Film and was also nominated for Best Picture. The film also went on to win the Golden Globe for Best Animated Feature.

In 1996, Hanks made his feature film writing and directing debut with That Thing You Do!  The film’s title song not only reached the Top 10 in many contemporary music charts but was nominated for an Academy Award® for Best Original Song.

After re-teaming with Ron Howard in Apollo 13, Hanks served as an executive producer, writer, director and actor for HBO’s “From the Earth to the Moon” – an Emmy-winning 12-hour dramatic film anthology that explored the entire Apollo space program.

In 1998, Hanks starred in Steven Spielberg’s war drama Saving Private Ryan, for which he received his fourth Oscar® nomination. The following year, he starred in The Green Mile, which was written and directed by Frank Darabont and is based on the six-part serialized novel by Stephen King.

In 2000, Hanks reunited with director Robert Zemeckis and screenwriter William Broyles Jr. in Cast Away, for which he received yet another Oscar® nomination.
Also in 2000, he served again with Steven Spielberg as executive producer, writer, and director for another epic HBO miniseries, “Band of Brothers,” based on Stephen Ambrose’s book.  The miniseries aired in the fall of 2001 to wide-scale critical acclaim, leading to an Emmy Award and Golden Globe for the Best Miniseries in 2002.

In 2002, Hanks starred in Road to Perdition opposite Paul Newman and Jude Law under Sam Mendes’ direction. It was followed by Spielberg’s stylish caper Catch Me If You Can, opposite Leonardo DiCaprio, which was based on the true-life exploits of international confidence man Frank Abagnale, Jr.

Hanks teamed for a third time with Spielberg in The Terminal opposite Catherine Zeta-Jones and followed it with the Coen brothers’ dark comedy The Ladykillers.  In November 2004, Hanks starred in the film adaptation of the Caldecott Medal- winning children’s book The Polar Express by Chris Van Allsburg, which reunited him once again with director Robert Zemeckis.

In 2006, Hanks played Robert Langdon in the film adaptation of Dan Brown’s novel The Da Vinci Code, helmed by Ron Howard and also starring Audrey Tautou, Paul Bettany, Ian McKellen and Jean Reno. He later reprised his role in Angels & Demons, also directed by Howard.  In 2007, Hanks starred opposite Julia Roberts and Philip Seymour Hoffman in Charlie Wilson’s War,  directed by Mike Nichols, which his production company, Playtone, also produced.  In 2011, Hanks was seen in Larry Crowne, which he co-wrote, produced, directed and starred in opposite Julia Roberts, and in Stephen Daldry’s Oscar®-nominated Extremely Loud and Incredibly Close with Sandra Bullock.

In 2009, Hanks was honored by the Film Society of Lincoln Center with the Chaplin Award.